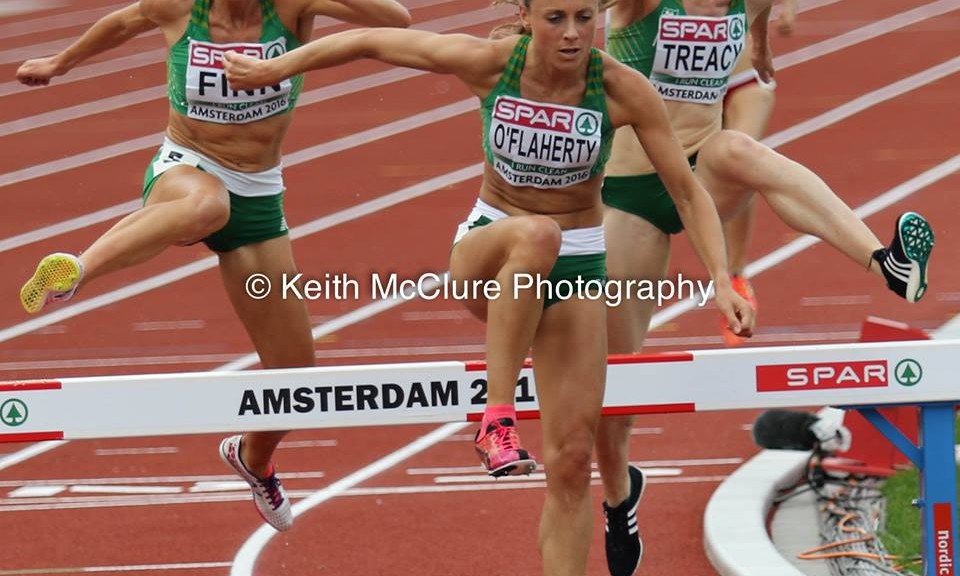 With 12 weeks of hard work at Altitude in the Pyrenees under my belt it was time to head to Amsterdam to meet my Irish team mates for the European Championships. I landed in Amsterdam after a quick 90 minute flight from Toulouse. It was great to see everyone again and I was excited to get a competitive race in before the Olympics in Rio.

Race day arrived for me, my first European Championships on the track and I was very nervous. On season’s bests I was ranked 28th out of the 28 girls competing. I guess I was a bit apprehensive but I tried to tell myself that my legs would be fresher than the others who had started racing in April/May.

The plan was to go out and run hard with my target being to make the final. The warm-up track was located just beside the main competition arena. It was a cold windy day and just after warm-up the heavens opened and the rain came down in buckets, so it felt like home.
The call rooms (2) were to be entered 45 minutes before race time so I had to make sure all my hurdle warm ups had been completed before I went in as there was nowhere to even stride out.

There were big TV screens in the final call room and we were able to watch the first steeplechase heat start (I was in Heat 2) and as they approached half way we were then marched out to the Stadium. My team mate Michelle was in heat one, with myself and Sara Tracey (other team mate) in heat two. It was the first 5 to automatically qualify from each heat and then the next 5 fastest after that (15 in the final). Michelle had finished fast to get an automatic 4th place, so we were determined to make it three green vests in the final.

We walked onto the track and the officials give time for approximately one sprint ‘stride’ and I managed to sneak one barrier clearance in too. Then it was to the line as the race start time approached.

The gun was fired and I settled in. Throughout the race I felt relaxed but also felt I surged a lot to try and gain places. I was intent on making sure that my first water jump was executed safely as there had been a fall there in the first heat. It was an outside water jump which although you get a good run in, it can be a tight angle to deal with on approach and the run out angle can be tight with so many other competitors. 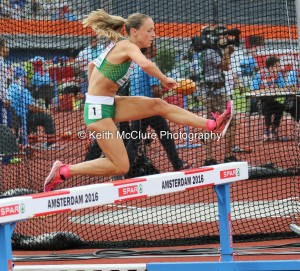 I got out of the water safely but felt I still wasn’t attacking it like I could. The bell finally went for the final lap (5 barriers of 35 to go). Our heat had gone slightly faster and I was in contention for a top positioning. The last water went well for me and over the final barrier with Sara in front, I was in 7th but knew I just needed one more place to make myself a little safer for qualification, I sprinted hard and passed a girl from Spain in the final few meters. 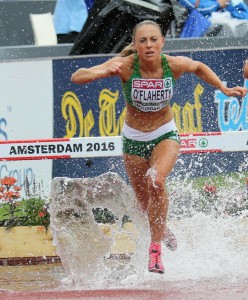 It seems like a lifetime for the results/times to come up on the big screens, but it was literally less than a minute. Having watched Heat 1 and seeing the times they had posted I knew what I had needed to do and all of a sudden the little ‘q’ was beside my name. I had finished 6th and had qualified as one of the next fastest. I was so happy, all three of us Irish girls had just made some more history; we all had made it to the European final in our debut at the Championships.

I looked up into the crowd and my coaches and team mates were all ecstatic. As we walked off the track into the main stand we approached the friendly face of Ailís McSweeney (RTE) for interview. After Ailís we then entered the ‘mixed zone’ where all the press are located, we were so happy and excited that we had all made the final I don’t think the press could get rid of us. Once the first question was asked they didn’t get a word in after that, lol.

You can hear one of my interviews with Will Downing – be warned, I can also talk for Ireland too!

There wasn’t much time to celebrate or watch the other races as thoughts then were channelled to preparing for the final which was in only 48 hours time. We needed to get the recovery drinks in, get a cool-down, ice bath, massage and whatever else we needed to recover as much as possible for the next big race. I didn’t sleep much that night but the day after was time to recover and again repeat all the things we had done after the race.

Sunday was approaching fast and then it was time for all the nerves to kick in again.

Sunday arrived pretty fast and all the race rituals recommenced, I found it hard to eat but managed enough and headed to the 1928 Olympic Stadium.

It wasn’t raining this time, it was sunny and 24C and there was a stronger wind.

I was in lane one on the start line, the gun went and I slotted into the back of the pack with Michelle just ahead of me and Sara around the middle of the bunch. The pace was fast and I was feeling tired from the off. I just had to stick out the laps and then give it all I had on the final two. 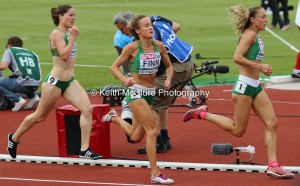 Two to go came pretty quickly upon us and I knew I had to get a few more places if I could. I went past Sara and Michelle and they came with me, it felt like we were working in a ‘pack of green’ as we closed down on a few competitors that seemed to be struggling a little. We approached the bell and Michelle was with me but had some extra speed in her. She passed me on the back straight and I tried to go with her. We were having a really strong last 200m as we approached the final water and into the home straight. I was in 9th, I think, as I took the final barrier, then a felt a few girls come round me and I was a little boxed in lane two with one right in front and two girls either side, I had nowhere to go but just sprint for the line. 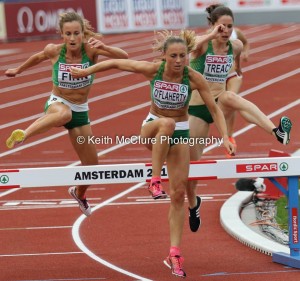 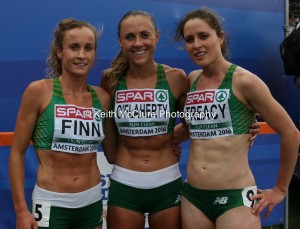 As athletes we always want a little more, it’s what gives us our edge, our determination to strive for better. But this trait can also ‘do our heads in’ and that night I found it really hard to sleep as that final 50m played over and over in my head. Three days on and its still playing over in my head – ‘what I could have done differently if I had been in another lane? If I had attacked that final barrier a little more aggressively etc etc? But our last race always stays embedded in our heads until the next one comes round. I guess I’ve gotta learn to park it and move on – for goodness sake Kerry, you’ve just finished 12th in Europe and the Olympics are just round the corner!