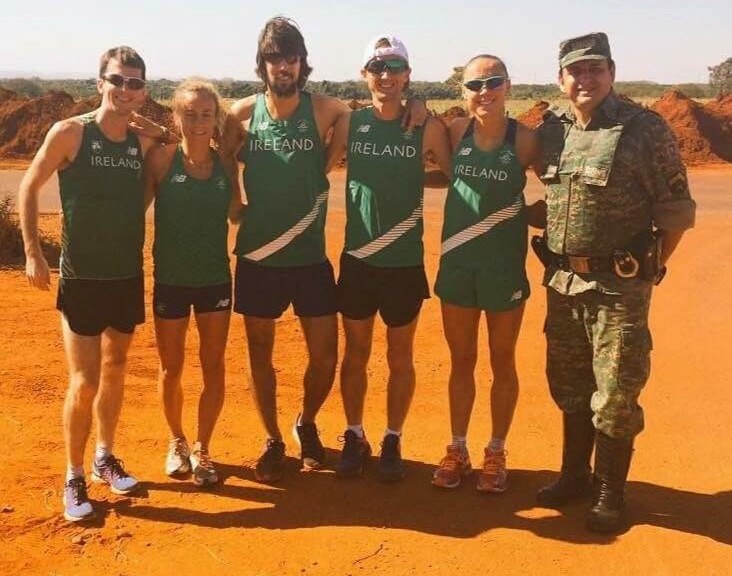 I wasn’t home for long before it was time to pack again for 5 weeks away in Brazil.

My Asics Spikes and Irish Race Kit was the priority and so it was packed into the hand luggage as always. Coach Rodgers had been asked to come out as part of the Endurance Team Support so it was going to be great to have him there at the training camp right up to race day in Rio.

We had to arrange for the whippets to stay with family for a few days and then their pet sitter Eimear was collecting them to stay with her for the month of August! I’ve never been away from them for so long so it was hard leaving them but they love everybody and they didn’t bat an eyelid at being left with my Mum.

So it was off to Dublin Airport to join the team and head off on the trip we had all worked for all our lives, it was very exciting. The first flight to Frankfurt was a little delayed and so we had to sprint through the airport to make our connecting flight to Sao Paulo, we made it – well they held the plane for us and off we went. I managed to sleep for a good bit and arrived in Sao Paulo not too tired but ‘luggageless’ as the airline had misplaced my suitcase and it had somehow ended up in Prague! We had a bit of a layover so we were taken to a nice hotel for breakfast and a few hours rest and then back to the airport for a short flight to Uberlandia where we would spend the next 10 days preparing for Rio. 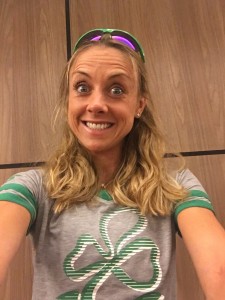 We had a lovely welcome in Uberlandia and settled into our hotel which was really nice and relaxing and, to my excitement, was attached to a shopping mall, so I was very happy, especially when I actually still had no luggage! It was 4 days of hand washing the clothes on my back before the airline finally delivered my case, it was like Christmas all over again.

We were taken to some good trails while we were training there (which were actually B roads), chaperoned by the local police each time. We felt safe enough but it was good to have them there and we even had a celebrity policeman – can you guess who he is impersonating? lol 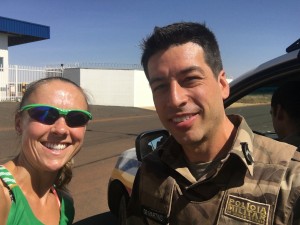 The local track was a great facility and although it was pretty windy for most of our sessions it was a nice tartan track and we had some great work outs. It was good to run with Lizzie Lee on my ‘kilometre session’ as training is always much more relaxed with company. We had a little fan club in the local kids but our biggest fans were two little Burrowing Owls who lived in a hole in the ground on the back straight and who would pop out to watch us train. Very cute. 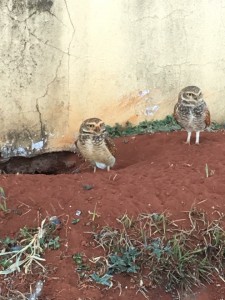 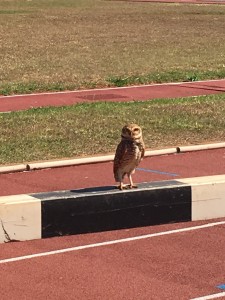 Unfortunately we were not flying into Rio until after the Games Opening Ceremony but there was a samba dance class put on for us that evening and some Irish cupcakes and the Ceremony on a big screen. By the time we had all sat up to watch our Irish team mates march in we were all glad we could then just head to bed for a good sleep before the next day’s training. 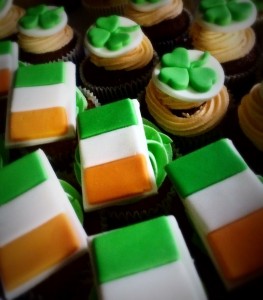 Uberlandia was a great spot with lovely people looking after us and making sure we felt at home. We got some great training in pre-Olympics and also had some great company and a few laughs while we were there. We were sad to leave but excited to finally get to the Olympic Village which would be home for the next twos weeks.