I first starting running when I was 13 and developed into quite a good junior 800/1500 and x-c athlete. I also ran a few road races and finished well up with many of the senior ladies at that time and tried a bit of mountain running too as my club Newcastle AC mainly raced and trained in the Mournes where the club is situated.

As I progressed onto University my running took a back step so I could concentrate on my studies and travelling from Newcastle to Jordanstown to Uni was a real strain on time too.

Whilst at Uni I kept my fitness up and competed for the University team at track, x-c and also mountain running. I soon became Irish University Mountain Running Champion and we also won the team title in 2008.

My mountain running was going well and the training suited my studies back then.

By 2005 I was getting myself involved on the track again and decided that after NZ I would pack in the Mountain running and try once again on the track.

It took a couple of years to get back to proper track training and competing but I just loved the buzz of it and the fact there were no hills to climb I soon started taking massive chunks off my previous times as a teenager and really enjoyed being back in the mix again with old friends and rivals.

After 4years at Uni I got into Teaching for a couple of years teaching at Shimna Integrated Colleage, Regent House Grammer School and St.Columbans.

I then moved to a carrer in Sports Development with the IFA as their first female development officer and spent a year in that job until an Athletics post came up in Development with ANI. I was 3 years with ANI until redundancy in 2009. Nursing a stress fracture at that time I decide that I would try and make a go at training full time as I was always left tired and drained whilst trying to juggle my running with my careers and I never had the time to look after niggles and injuries properly whilst working.

In 2011 I made my debut in the steeplechase winning the Loughborough International & have been working on this event since lowering my time from 10:22 to 9:56.

In 2014 I representing Northern Ireland at the Commonwealth Games in Glasgow in the steeplechase.

My big goal now is to compete at the Rio Olympics for Ireland 2016. 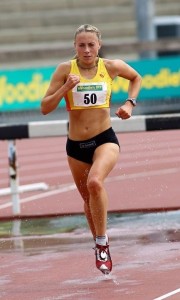